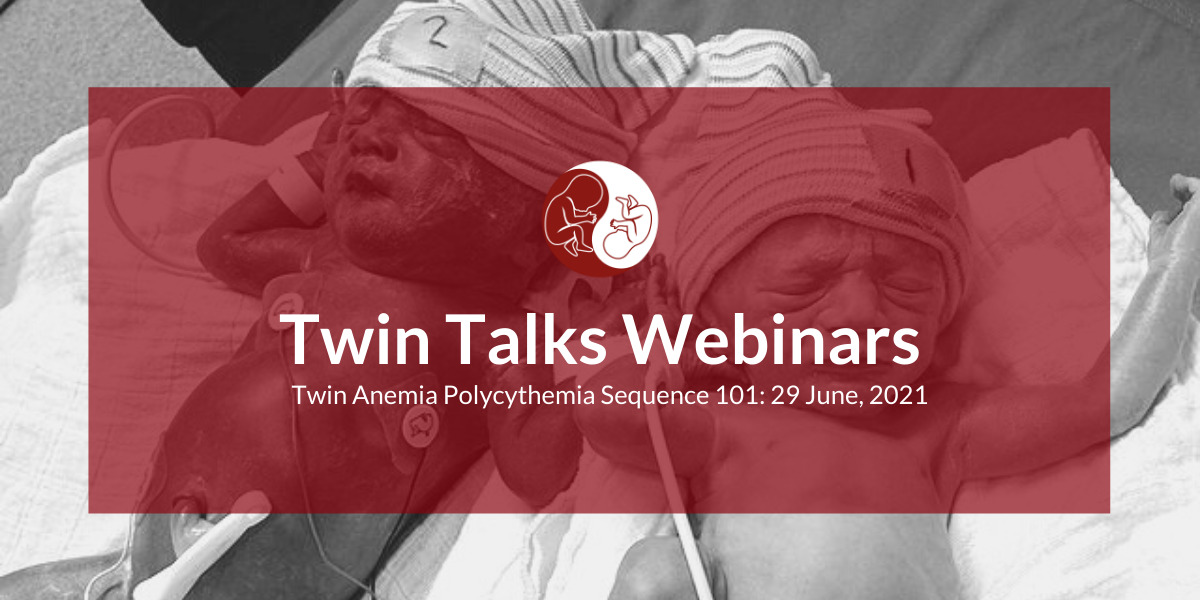 The first of our webinars, Twin Anemia Polycythemia Sequence 101: We answer the questions that you want to know about TAPS was held on June 29th, 2021.

This webinar is a joint initiative of the LUMC Fetal Therapy Team and the TAPS Support Foundation.

Dr. Femke Slaghekke
Maternal-Fetal Medicine Specialist & Fetal Surgeon.
Dr. Slaghekke brings her years of experience in maternal-fetal medicine and sonography to the webinar. She is responsible for developing the early staging systems for TAPS and developed the Solomon Laser technique used to treat TTTS and TAPS.

Dr. Lisanne Tollenaar
TAPS Researcher
Dr. Tollenaar’s work with the TAPS Registry, and studying the long-term effects of TAPS has led to remarkable breakthroughs in how we perceive and treat TAPS.
Dr. Tollenaar also has an interest in how a diagnosis impacts families, and how professionals can factor this into consultations.

Bethany Beck
TAPS Parent
Bethany is a proud mom to Arielle and Ayla, who were born at 29 weeks due to TAPS.
Her passion for sharing her story comes from having to advocate to get TAPS screening, and getting her diagnosis at the first screening

Twin Anemia Polycythemia Sequence is a rare disease affecting monochorionic twins. Named and described just 15 years ago, this disease is often misunderstood and misdiagnosed. The aim of this webinar was to talk about TAPS with leaders in research and help patients understand more about this disease, and let them ask experts about the facts. Here are the answers to all the questions that were asked!

Is TAPS a form of TTTS? Or is it completely different?

TAPS is not a form of TTTS. They are separate entities with different pathogenesis, diagnostic criteria, neonatal problems, and long-term outcome. However, TAPS and TTTS are both forms of unbalanced transfusion in monochorionic twins. In TTTS, the vascular connections on the placenta are large, causing a relatively rapid and large transfusion from the donor to the recipient, causing the donor to become hypovolemic (and develop oligohydramnios). The recipient becomes hypervolemic (and develops polyhydramnios). With TAPS, the placental vascular connections are minuscule (diameter < 1mm), causing very slow, chronic unbalanced transfusion of red blood cells between the twins, causing the donor to become chronically anemic, and the recipient to become chronically polycythemic.

How long does the transfusion between the babies take before TAPS develops?

This is something we do not precisely know. But since TAPS is a chronic disease, and anastomoses are small, it usually takes weeks before the slow unbalanced transfusion leads to anemia and polycythemia. There is, of course, variability between TAPS cases; some are more progressive than others (some develop within a couple of weeks, others develop slowly within months). TAPS cannot develop within hours or one day.

In post-laser TAPS cases, is it thought that TAPS could have occurred even without the laser surgery TAPS because the anastomoses are there?

No, tiny anastomoses missed during laser surgery for TTTS are needed for a twin to develop post-laser TAPS. It is not likely that a placenta that causes TTTS (and therefore has large vascular connections) also causes TAPS (that only arises from tiny vascular connections). Therefore, TAPS can only develop once these TTTS placentas have been lasered: the large anastomoses have been coagulated (blocking the large transfusion causing TTTS), and tiny ones have been missed (that will cause post-laser TAPS)

How often do you see SIUGR/SFGR in the donor twin when TAPS is also occurring?

What if the MCA measurements don’t show signs of TAPS, so they had normal PSV, but at birth, they have the looks of the TAPS signs? Could we do other measurements, or can it occur just before birth?

If there is a pale and plethoric twin at birth, there are three things that need to be done to establish a diagnosis of TAPS

Blood needs to be drawn from both babies directly after birth. The following values need to be measured

Hemoglobin (Hb). A significant hemoglobin difference (> 8 g/dL) is the first criterion for TAPS.

The placenta needs to be examined after color dye injection of the vessels has been performed. A TAPS placenta will show:

TAPS cannot occur just before birth or during delivery. It takes days-weeks to develop. The pale and red twin may be caused by acute peripartum TTTS that develops during delivery (see webinar video for further explanation)

With post-laser TAPS, is it true that donor and recipient switch roles?

Do you always inject all TAPS placentas with dye post-delivery, even if the diagnosis was made prenatally with MCA dopplers?

Yes, in the LUMC, we do this because the placenta is needed to confirm the diagnosis (by seeing only small connections on the placenta) and understanding what happened during the pregnancy. How many anastomoses do we see, and what are the types? How is the placenta shared? How is the branching of the vessels of the recipient and donor?

In post-laser TAPS, it is especially vital to inject the placenta to be able to learn from the laser procedure. Where are the anastomoses that have been missed? Is there an explanation of why they were missed (maybe the donor was lying on the vascular equator, maybe there was poor vision, etc.). Fetal therapists must look at the placenta and use this information to be able to improve their skills.

How do you perform IUT in TAPS? Intraperitoneal or intravenous?

Both intravenous and intraperitoneal can be done, depending on technical feasibility. This will be explained in more detail in the next webinar.

Is there a way to prevent Acute TTTS? IS there a better delivery method for monochorionic twins?

Currently, we do not know why acute TTTS develops. Some hypotheses are that it occurs due to fetal positioning and uterine contractions, but the exact mechanism is not entirely understood.

Do you perform sequential laser technique for TAPS the same as TTTS? Do you always create an artificial TTTS environment for it?

In TAPS, there is no amniotic fluid difference. Because of the absence of the polyhydramnios, the uterus in TAPS is not tense. The placenta is thick (and not flattened), and the intertwin membrane is wavering across the vascular equator. These factors make a laser procedure technically very difficult. To optimize the conditions for laser surgery, an artificial TTTS is created. One sac is infused with fluid (creating polyhydramnios), whereas from the other sac amniotic fluid will be drained (creating oligohydramnios). In this way, there will be more room to perform the procedure, and the intertwin membrane will be wrapped around one of the fetuses, allowing visualization of the equator.  After the procedure, the excess fluid will be drained from the twin with artificial polyhydramnios. The oligohydramnios in the other twin will naturally resolve by themselves over days and is not harmful.

How much blood is exchanged between the twins? Is it a lot or very small amounts that are causing TAPS?

We do not precisely know this number. It also depends on the number of anastomoses and the gestational age of the pregnancy. We have calculated using computer models that those tiny anastomoses allow a transfusion of approximately 5-15 ml per 24 hours.

Is it common for TAPS donors to be behind with their gross motor skills?

Why don’t we screen dichorionic or opposite sex twins for TAPS?

Boy-girl twins are dichorionic twin pregnancies. We don’t screen for TAPS in dichorionic twins, because TAPS in those cases is extremely small. There are only a few reports about it worldwide. But if caretakers see signs of TAPS in a dichorionic pregnancy, they need to do the TAPS diagnostics, because it can happen.

Why is there not a lot of awareness about TAPS in twins?

Because it is a relatively new disease, and it takes time to convince every hospital caring for twin pregnancies that TAPS is something we should screen for. After years of research, more and more hospitals are convinced that it can be a harmful condition with severe consequences and start screening for it. Some hospitals still refrain from doing so because there is no best treatment yet. However, there are valid management options available, such as intensified monitoring of the twins’ condition, or laser surgery, or IUT/PET, or performing a preterm delivery.  What is the best option is now investigated in The TAPS Trial.

How can we raise awareness of TAPS and stop some of the myths?

It’s important that we do a few things here. The first is that we try to educate people that it’s not a form of TTTS, but rather its own disease. Calling it a form of TTTS dilutes the urgency of updating screening because there’s a huge difference in how we screen for it.

The next thing is to share our stories, just like Bethany did in this webinar. and keep talking about TAPS. Your voices are the most important, as you have the lived experience to help others with their diagnosis.

Lastly, for doctors and care providers, it’s important that you step up and update your knowledge. IF your patient asks about TAPS screening, sit down with them and talk about all the options, outcomes, and treatments. We need to stop all the myths about TAPS.

Is there anything we can do to prevent TAPS from happening? Can we eat extra protein or do other things to stop it?

No, developing spontaneous TAPS is, unfortunately, ‘bad luck. The placenta has developed so that there are only very small anastomoses allowing unbalanced blood transfusion. There is no scientific proof that extra protein can prevent this from happening.

Prof. Dr. Enrico Lopriore
Head of Neonatology, LUMC.
A world-leading expert in TAPS, Dr. Lopriore has in-depth knowledge of TAPS and a passion for helping patients understand their diagnosis.
His 2006 paper gave TAPS its name, and he has spent many years passionately continuing research and raising awareness.

Dr. Joanne Verweij
Obstetrician and Maternal-Fetal Medicine Specialist
Dr. Verweij’s specialty is the ethics of maternal-fetal medicine, and the impacts of extreme prematurity on families, and how to care for these infants.