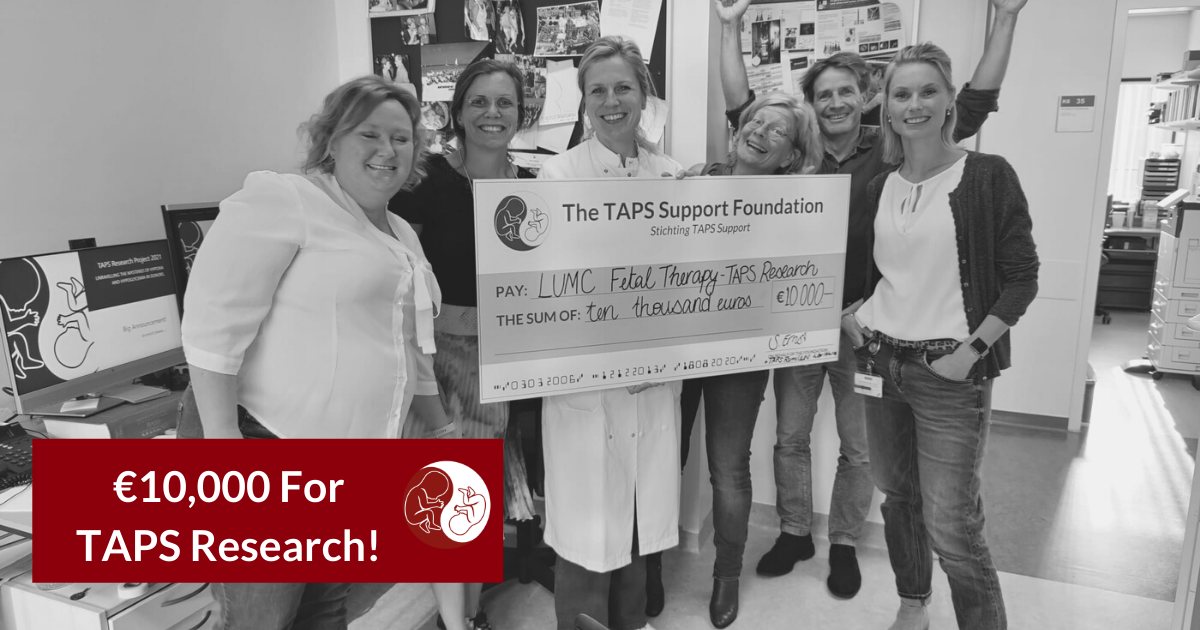 In 2021, we’re starting an important project.  Our big, hairy, audacious goal (BHAG) is to raise €10,000 to fund a part-time TAPS researcher within the LUMC in Leiden to continue research into Twin Anemia Polycythemia Sequence.

One of the most significant issues within research, especially rare disease research, is a lack of funding to continue projects.  This is the case with TAPS research.

In 2019, the work of Dr. Lisanne Tollenaar resulted in the release of the first long-term effects paper on TAPS, meaning that patients were able to finally begin to advocate for testing for their twins.  The research uncovered a high risk of cognitive delays for TAPS twins, with donors at the highest risk.  It also revealed a connection between TAPS donors and Auditory Neuropathy Spectrum Disorder (ANSD), a form of deafness.

Other significant findings were collated from the TAPS Registry, an international collaboration between 17 centers worldwide.  Data was collected from 370 TAPS cases and provided valuable insights into the diagnosis, treatment options, and outcomes for both spontaneous and post-laser TAPS cases.

Access to this information has meant that the TAPS Support Foundation has provided members with access to the relevant research and helped families get appropriate testing, which would have potentially been missed.

The biggest problem we face as TAPS families is that we are often thrown into the same category as TTTS cases, and that our concerns are overlooked.  We know that TAPS is not the same as TTTS, which is why research is vital.

TAPS is rare.  There is limited funding for rare diseases, meaning that research can often only be done when there is a boost with public funding or a grant from a private organization.  There is also a real issue attracting researchers to rare disease research, as they often need to source their own funding.

We hope to achieve more data, more information, and more interest into TAPS by funding this project.  This project aims to expand on existing findings on chronic anemia and hypoxia in TAPS donors. It will also focus on the best treatments before and after birth.

The long-term effects research into TAPS found a high chance of neurodevelopmental impairment in TAPS survivors. Donors being the most affected.  Deafness is found in TAPS donors that is not recorded in TTTS survivors. The research project we are funding will investigate why TAPS donors are born hypoglycemic (low blood sugar), as well as hypoxic, and what impact this has on their long-term development. You can read more about it in the research proposal below.

If you have questions or want more infomation – get in touch with us at hello@tapssupport.com. We’re more than happy to answer your questions, or put you in touch with the right people.

Let’s kick off 2021 with a bang and continue this much needed research into TAPS. Donate below and help us reach our goals!