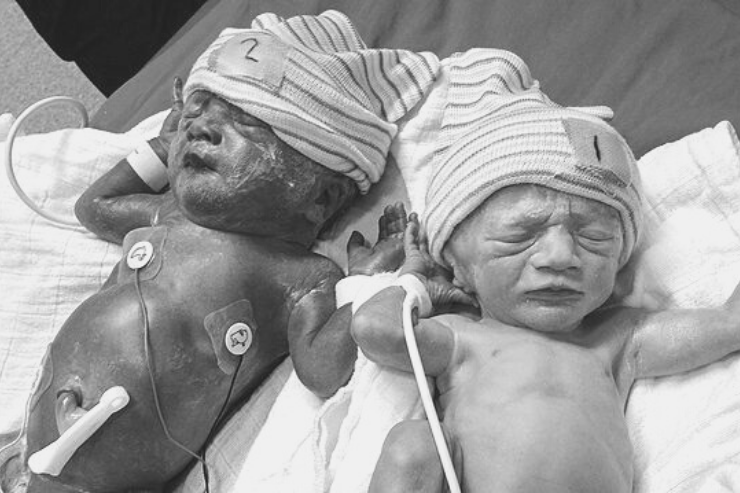 Stichting TAPS Support was created to support research into Twin Anemia Polycythemia Sequence, a rare complication of monochorionic twins. Learn more about why we created this foundation.

In 2013, Stephanie and Marius Ernst were excited to discover that they were expecting identical twin girls. At 24 weeks, their local hospital diagnosed them with stage 1 Twin to Twin Transfusion Syndrome (TTTS), and referred to the LUMC in Leiden, The Netherlands.

The TTTS resolved, but over the following weeks, their twins showed signs of TAPS developing. On the 12th of December, 2013, it was decided that the girls were better out than in, and on that cold winter morning, 2 little girls made their dramatic exit into the world. Read more here.

If I have a thousand ideas and only one turns out to be good, I am satisfied.

When we were looking for information about TAPS, there wasn’t a lot of options. A handful of papers, a Wikipedia page, and a few Dutch-based websites. There was a lot of information on Twin to Twin Transfusion Syndrome, but when we reached out no one could give us good information or in some cases, could even relate to our diagnosis and the level of uncertainty we faced.

And then our girls were delivered, and they survived the unknown. Over the following years, Stephanie started writing about her experience and remained in contact with the research team. More and more, she realized that there was a need to break down the barriers between research and the medical community, and ensure that patients get accurate information.

In 2018, she created the TAPS Support Facebook group, which has grown over the past few years, and has created a community where patients can talk about their concerns, get the latest information to advocate, and the TAPS Support website where information is put into language that parents can understand.

This wasn’t enough though, and she wanted to work out a way to give back to the team that saved Emilie and Mathilde’s lives. This is how the idea for Stichting TAPS Support was born.

Research is the future of Twin Anemia Polycythemia Sequence. Our goal is to raise funds to extend research into TAPS, so that we can understand more about it. More research means more information for families, so they can make informed choices about their own treatment, and long term followups.

Through our patron, Dr Lopriore and our expert advisory panel, we’re hoping to help ensure that research continues. Not only do they make sure we have the most up to date information about TAPS, with the latest findings delivered to our inbox, but also that we know where to direct the funds we raise in order to support the continuation of research.

Interested in learning more about TAPS, or about us? Get in touch with us.