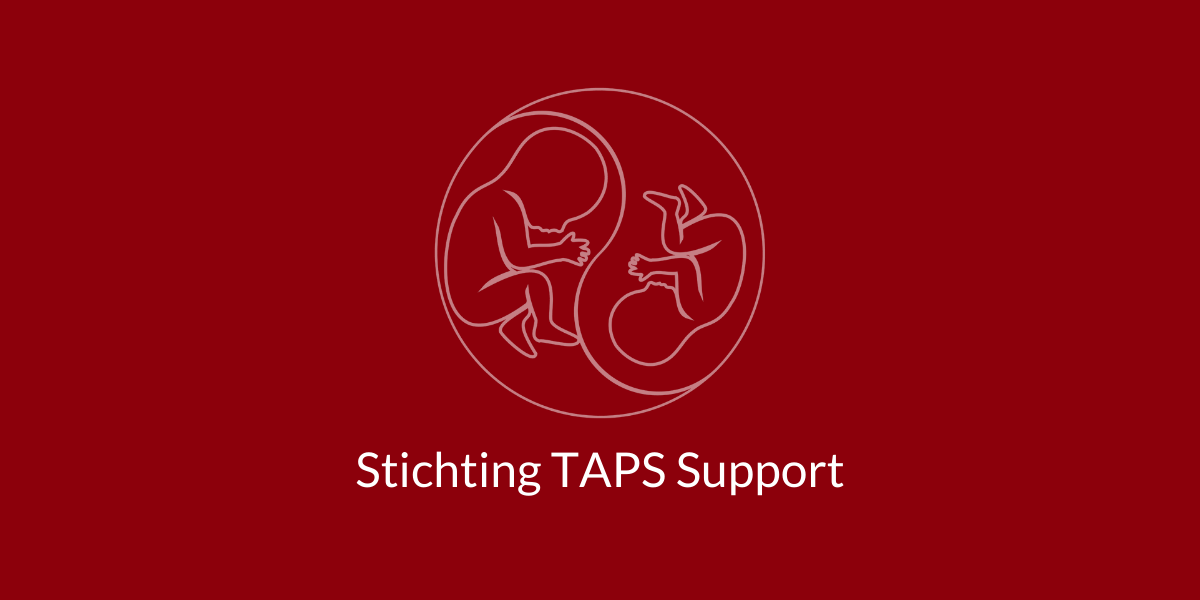 In December 2013, on a cold morning in Leiden, 2 little girls were born. Identical twins born at 31 weeks, with one so pale and anemic that she looked like a ghost, and her sister, red, puffy, and overloaded with red blood cells. They had overcome incredible odds to make it this far, battling a chronic disease that had only been described for the first time 8 years earlier. Their story is the inspiration behind, and the beginning of the TAPS Support Foundation.

Emilie and Mathilde were born with Twin Anemia Polycythemia Sequence, a rare complication affecting twins sharing a placenta. Affecting just 5% of monochorionic twins (or twins who share a placenta) spontaneously, and in up to 16% of post-TTTS laser surgery cases, TAPS is a relatively unknown and under-diagnosed condition.

It is caused by tiny connections in the placenta, less than 1 millimeter thick, where red blood cells pass from donor to recipient over a long period of time. This makes the donor twin anemic with blood like rose wine, and the recipient twin polycythemic, with blood as thick as ketchup.

It causes the dramatic color difference you can see in this picture, which is characteristic for twins born with TAPS. TAPS is diagnosed before birth using mid-cerebral artery readings (MCA dopplers) and after birth with specific blood tests and pathology of the placenta.

Emilie and Mathilde survived their diagnosis, but there are many other families who face uncertainty and fear due to their TAPS diagnosis. Stichting TAPS Support wants to connect families, so that they aren’t alone in their diagnosis, and help them find accurate, up to date information.

The best way to do this, is to support research into TAPS.

Our aim is simple. We are supporting research into Twin Anemia Polycythemia Sequence and related conditions, like Twin to Twin Transfusion Syndrome (TTTS) and Selective Fetal Growth Restrictions (SFGR), through raising funds for special projects.

Currently, worldwide, there is no consistent guideline to screen for TAPS before birth in monochorionic twin pregnancies. There are many excuses given as to why, and a lot of guidelines actively discourage care providers from TAPS screening.

Citing reasons like “there’s no best treatment”, or “there’s not enough known about it” is just no longer acceptable. Since 2005, research has been ongoing into TAPS, it’s long term effects, what causes it and how to treat it. Previous registries like the TAPS Registry , and the current TAPS Trial are providing valuable information into best treatment and management strategies.

We want to ensure that research continues into TAPS and related disorders so that we can continue to advocate for the best care and treatment for our children. This starts with collecting donations, raising awareness through our own websites and social media channels (for example our Facebook and Instagram pages) and helping those diagnosed with TAPS break down some of the medical jargon, and understand their options.

One of the things we are passionate about is providing support to families diagnosed with TAPS before, during and after birth. Long term effects can be devastating to families, with the risk of neurodevelopmental impairment for both forms of TAPS, and a 15% chance of deafness for donor twins in spontaneous TAPS.

One of our core aims is to make sure that families can access the latest research in the language they can understand, and that they can take this to their teams to advocate for the care they need before, during and after birth. It’s also about providing a place where families can connect and share their stories, and giving doctors and researchers an insight into the types of questions that patients want to ask.

We currently run an international Facebook group for this reason, but our future plans see extending this to “real life”, giving people the opportunity to meet in person and connect.

The final part of our mission is to raise awareness of TAPS. We’re helping families advocate for the right care, and helping them with the tools they need to advocate . Through our active social media campaigns, we’re sharing the latest research and the stories from our families. We’re interviewing the researchers, and we’re making sure that TAPS becomes a household name.

We’re committed to ensuring no one is ever alone in their TAPS diagnosis. This new foundation will bring new energy to the world of monochorionic twins and research, and it begins today.

Follow us on Social Media to discover more, or get in touch.