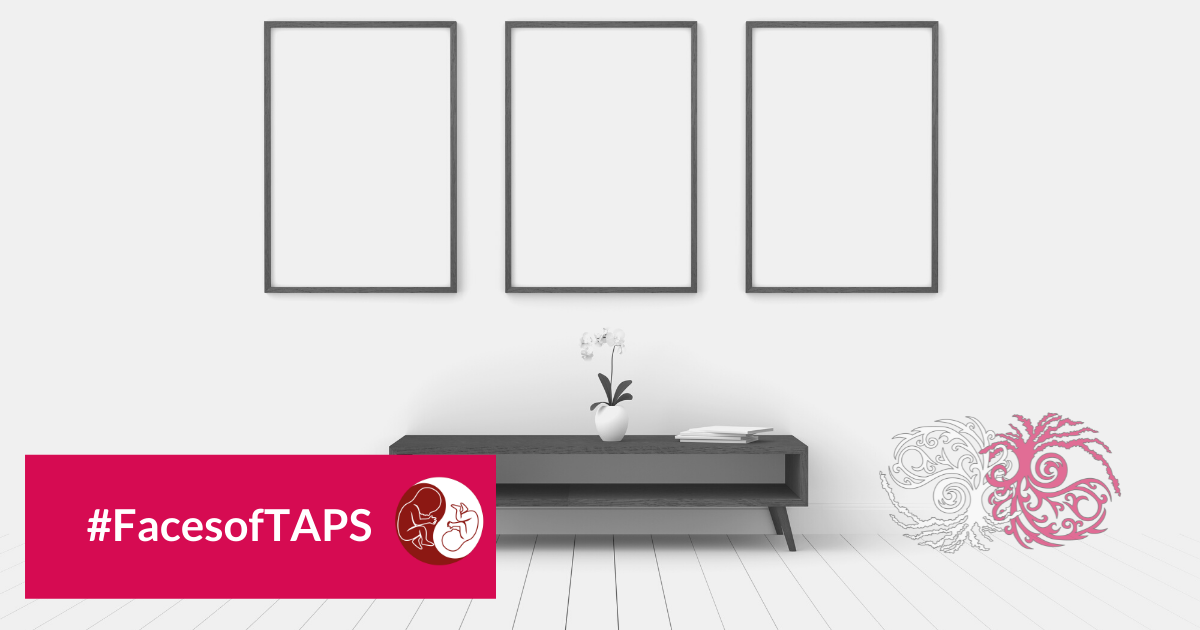 Each year for International TAPS Day, we showcase the members of our community, and also some of the researchers and doctors behind TAPS. This year is no exception, and our #facesofTAPS campaign is back in 2022.

Meet some of our family below, and they’ll share how connections have changed their TAPS journey.

Meet Ella and Holly, who were born at 30+5. We were watched closely for TAPS but not diagnosed before birth. Last ultrasound before CSection was alarming, so we delivered. In the 2 days between ultrasound and C-section they got worse.

We still don’t understand what TAPS is for us. It’s something new daily, but connecting with an active online community helped us find people who are in the same situation, and sharing their experiences helps us learn more.

Meet Robin and Finn.Diagnosed with TAPS at 21 weeks in the middle of the first Covid-19 wave.
We were lucky to have had an excellent OB and MFM in Adelaide, however, the potential laser surgery which we were incredibly close to multiple times, could not have been performed in Adelaide. Given all interstate borders were closed, getting to Brisbane (and back!) would have been a near-impossible undertaking.
From week 21 to 28 it was all about an action plan that we set up with OBs and a neonatologist for each week from laser surgery to early delivery, depending on the severity of TAPS. MCA Dopplers were checked twice a week. I can’t stress how grateful we are to our doctors for their close monitoring and accurate diagnosis. We had no other signs of TAPS other than discordant dopplers. We delivered at 32 weeks, the best outcome we could have hoped for. This may give hope to some out there. For us, albeit desperate at times, the situation has stabilized and even slightly improved towards the end. Finn & Robin are happy 19 months olds now.
Our donor has so far been reaching milestones slower than his brother but has no significant delays. I often wonder though “where to from here?”. Where are we on this TAPS journey? When I asked the top-rated private pediatrician about his view re TAPS, his answer was “don’t worry, that’s done now.” Is it really?!

Mila and Mika were diagnosed with TAPS at 24 weeks. Luckily I had an excellent Dr that researched TAPS so he was quick to put the only option I had to me of intrauterine transfusions (injecting blood into twin 1 and taking away blood from twin 2 and injecting her with saline to thin the blood).

This is was an Australian 1st in 2015. 3 transfusions were completed on each baby over 3 weeks buying them much needed time in the womb. They spend 9 weeks in hospital (only set back being ROP in twin 1 which resulting in surgery) and are now happy 7 year olds.

I’m so thankful for the connections of this group and being able to help others along their journey.

Meet Olly and Huddy. Our boys Olly & Huddy were diagnosed with TTTS at just 14 weeks. A pregnancy that was full of fear. I delivered our beautiful boys at 34 weeks. It was then that we discovered the boys also suffered from TAPS.

We are still on a journey of what TAPS means for them- both boys have GDD and other issues requiring OT and Physio.

We are so blessed to find connections with other families through groups such as these as they know the struggles, and help celebrate the wins no matter how small they are!

The NICU team was able to manage their immediate care, but didn’t have any answers for what we should expect as they developed.

The TAPS community and its research have given us those answers so we could advocate for the screenings and therapies they need.

Meet George and Simon, born at 33+5 with spontaneous TAPS that went undiagnosed until birth.

We truly cannot stress how incredibly life changing the connections of this organization have been for our family. Before we even knew what our boys were facing, their Neonatologist was diagnosing them with a rare disease because of the work of so many incredible people around the world to research and share about what TAPS is.

Early, and proper, intervention immediately after birth helped save their lives.

We have also been given the most incredible support system: willing to answer any and all questions, to provide vital research in an easy to understand way, and to cheer us on as we advocate for needed tests and interventions.

Not once since we reached out to this group have we felt alone on this journey.

My twin girls were diagnosed with TAPS at birth. Lilly recipient and Charlotte the donor twin.

TAPS was fairly uncommon in my local hospital and Lilly was separated from myself and her sister in order to receive treatment elsewhere.

At the time I felt like there wasn’t much information given to us on the condition.

It’s great that this group is available to help spread awareness and show parents that they aren’t alone on their journey.

At their birth, the doctors had no clue. Kept referring it to TTTS and insisting dopplers were never necessary because they were growing equal.

Molly needed two blood transfusions and Lily needed her blood diluted. I learned then that hospital had no real understanding of TAPS.

This TAPS community is my resource for help and knowledge. They help me educate doctor’s and nurses.

Everyday is a “what if” and “what is to come of their TAPS diagnosis.”

TAPS means I can only hug 3 of my 4 children. It means we are never complete. – Jen

Meet Zara and Gabriella. They had a TTTS and TAPS diagnosis at 22 weeks followed by laser ablation surgery and then delivery at 31+6. So far no post-delivery complications. The girls are almost 2.
Our TAPS diagnosis was handled very efficiently and the girls were supported medically we have definitely been affected as a family more on an emotional and psychological level.

The most important connections for us through this journey are those with support groups where our experiences can be shared and we can seek information.

There is a need for more readily available options for TAPS families to connect with specialized mental health professionals and counseling services.

Meet Eastyn and Kaedyn. While pregnant I was never told about TAPS. Only was ever told about concerns with TTTS. When my twins were born, one was white as a piece of paper and the other red as a tomato. We were told it was TTTS. The recipient twin was rushed to the NICU. The donor twin I held in the OR and even went back to my recovery room with me.

It wasn’t until the NICU nurse came to do her evaluation that we learned just how severe things were. His O2 was in the 70s and he was not doing good. He was rushed to the NICU. received 2 emergency blood transfusions and was intubated. This entire time they referred to it as TTTS. Not until I found Stephanie and the support group did I know about TAPS. With everything we have learned, we believe TAPS is the true diagnosis. Our donor twin was also diagnosed with Auditory neuropathy at 2 years old. Our recipient twin was fine after a few weeks and came home and has had no last effects. Our donor twin is another story.

It has taught me to stand up and be the voice for my kids more than I ever have before. We have fought for so much for Eastyn. The older he gets the more we have to fight for services and things for him. I often wonder if things would have been different if I had known more. But we are so happy they are both healthy and thriving. I read stories of families just beginning the twins’ journey and my heart goes to them. If it wasn’t for things like this. People really wouldn’t know.

Our girls Audra and Amelia were born at 31 weeks and 1 day on World Prematurity Day in 2020. I was fortunate to be closely monitored during my pregnancy.
At 29 weeks it was confirmed that my girls had TAPS. Audra needed an intrauterine blood transfusion that bought us 10 days before delivering. Audra’s kidneys were injured from the lack of blood and has chronic kidney disease stage 3 and is being followed closely by nephrology.
My girls are so happy and full of life! We are so blessed to say we are a family of 5. They complete us! They have given us strength and showed us how we too can overcome obstacles.
I’m so grateful for the connections that were available to me so close to home. My doctor at the Maternal-Fetal Center had knowledge about TAPS and even performed the intrauterine blood transfusion.
He saved my girls’ life! We are also blessed with a teacher that comes to our home for support in helping my girls meet milestones that they’ve had to overcome because of TAPS and prematurity.

Lily & Scarlett were born at 26 weeks exact. 750g & 840g. Post laser TAPS after TTTS at 20w2d, was on bed rest from 24w after compromised cervix probably caused by laser, was picked up in a morning scan and delivered that evening.
Scariest moments of my life – that few hours and the toughest journey after. The girls developing this unforgiving disease and being so unknown to me has made me the strongest, most grateful, loving, and fearless mum. My girls and I can overcome anything together as a unit. They inspire me every day and remind me to be thankful and positive and they have, and their little sister, been and still are, my lifelines especially through this last 18months, which has been another challenging time for me after fleeing my marriage. I’m told I’m brave and strong, but it’s because they make me

Now just over 3yrs old, no major longer lasting concerns at present, they are thriving and smashing all expectations and becoming sassy, independent cheeky monkeys. They helped me connect to strength I didn’t know I had.

Meet Olive and River. Olive & River were born at 34 weeks after being diagnosed with spontaneous TAPS.

Connections to other families & the research empowers me to make informed decisions and to always advocate for my girls.

They have taught me to be resilient and strong even when all hope seems lost. They are 8 months old now and the light of my life.