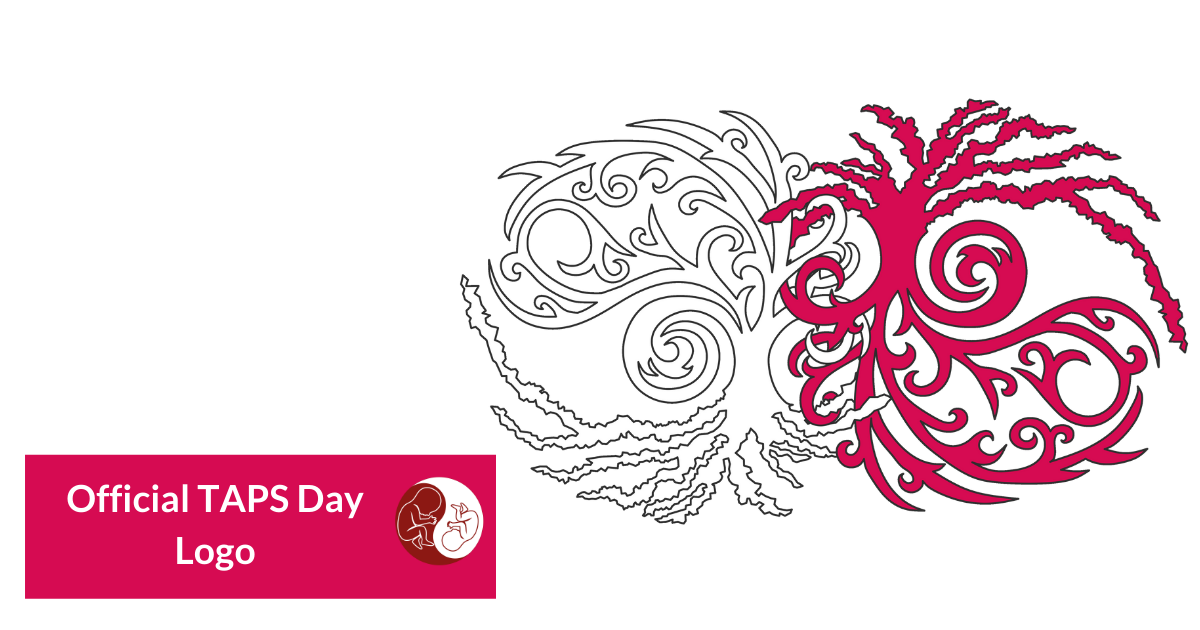 This year’s image was designed by Isolde de Ridder, a designer and goldsmith located in Almere, The Netherlands. The artwork is titled “Connections”, and was made exclusively for TAPS Support.

In some cultures across the world, the placenta is seen as the tree of life – and some even say that the blood vessels and cord resemble the roots and trunk of a tree. The tree of life symbolism appears in many cultures and religions globally and signifies wisdom and knowledge, strength and longevity, and connecting the heavens to the earth.

In monochorionic twins, the blood vessels in the placenta are intertwined and shared between the twins. Just like the roots of a tree, the size, the direction, and how they connect to the placenta have an impact on how the twins grow. Small blood vessels can be just as problematic as large ones. Unequal sharing of the placenta can cause unequal growth. As a result, twins with shared placentas also face problems with growth and sharing of nutrients and blood.

TAPS is caused by tiny blood vessels within the placenta that are connected and one twin sending red blood cells to the other but does not receive them back. This causes anemia and polycythemia.

Our logo is two trees, intertwined with connections between them. Isolde drew inspiration from both Celtic imageries, and pictures of twin placentas to bring this image to life. The twin trees symbolize wisdom and strength, and the connections between the trees remind us of the bonds our rare disease has created between research and patients. Using the symbolism of the tree of life embraces that our rare disease crosses cultures, countries, and religions, and connects those who are diagnosed, and those who diagnose TAPS worldwide.

Why Pink And White?

We first utilized pink in our TAPS day campaign last year – a bold choice. As an organization, we feel that it is important that it isn’t seen that we “own” this day or this disease, but rather that we are here to support and recognize the research that is done, and work with the families that are diagnosed with it.

In 2020, I put out a call to my network to find a local designer who could take an idea out of my head and play with it. A friend, Petra (who was a strong supporter of our foundation and has sadly lost her battle with cancer last year), connected me to Isolde.

Without knowing her story, or much about her, I met her to discuss my idea, and we instantly formed a bond. She took the idea from my head, and created the image we see above.

Isolde is no stranger to the complications of multiple pregnancy, and sadly, is a twin loss parent. Her passion and strength and personal experience is forged into the soul of this image, and has created a beautiful, special and meaningful design for all families worldwide.

This image means more to me than ever, because of the incredible connections of a friend, and the depth of the meaning to all that have been involved in this project. This piece resonates with me on a personal level just because of the strength, determination, and inspiration that have been part of this whole piece.

There are deep connections here, and it is just the beginning of a larger picture, and even more ways to connect with TAPS.